Edmonton police are focused on shutting down illegal weed websites. Will their strategy work? 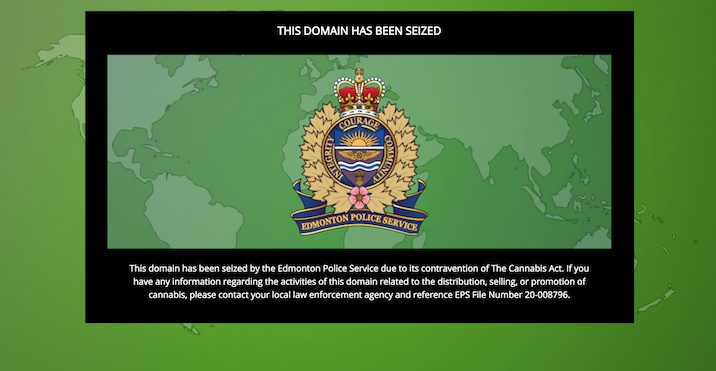 Police in Alberta have seized hundreds of domains purportedly selling illicit cannabis. But are they even making a dent?

“Politics, convenience and product.” These are the three reasons long-time cannabis consumer Andrew gives for using the illicit market rather than legal stores.

It’s been more than 18 months since Canada legalized weed, but the 54-year-old Nova Scotian prefers to buy from an illicit cannabis website. “I’ve simply been told by people that they’re not happy with the product or the price. So I’m just not going to try,” he says.

After placing orders from a few different sites over the last three years, he and his wife settled on a favourite. It’s more convenient than walking to the store, and cannabis arrives directly to their mailbox — no presenting ID or signing for packages. Plus, he says he doesn’t want to support an industry where former police and anti-cannabis politicians are now profiting from legal weed sales.

But there’s a good chance that his favourite illegal weed site could soon disappear. Since March 16, Edmonton Police Services (EPS) has seized more than 100 domains of illicit cannabis sites, which serve customers all over Canada. They also launched an ad campaign to educate consumers about what sites are and aren’t legal.

Under the federal Cannabis Act, selling illicit cannabis can mean up to 14 years in jail; possession can mean up to five years in jail or a fine up to $5,000, warns EPS. They also warn that provincial cannabis distribution laws come into play, depending on where the business is based: Under Alberta’s Gaming, Liquor and Cannabis Act, businesses can be fined up to $50,000 for selling cannabis without a licence, and individuals can be fined up to $10,000 or be sentenced to as much as a six-month prison sentence.

While regional police forces across Canada decide where and how they allocate budgets and to what degree they’ll enforce the law, EPS’s warnings to consumers and sellers don’t appear to be empty threats.

Just this month, Edmonton police charged four people with possession and possession with the intent to traffic illicit cannabis after investigating The CannaBus 780. On the company’s website, customers could order online for in-person deliveries to their door. The total value of the cannabis products seized, including the cash and seven grams of crack cocaine they also found, was $61,000.

Customers seeking cannabis through the illicit market aren’t just Googling weed websites or getting recommendations from friends. But Reddit’s forum for mail-order marijuana sites is no longer accessible to individuals with Canadian IP addresses (but can still be viewable via VPN). Another site, Weedmaps, started vetting clients for proper state licensing in the U.S. in an effort to clean up its business listings, but so far, the site continues to list illicit sites and sellers for most locations in Canada.

With seemingly more police overview, what started out as a convenient way for customers to find illicit weed deliveries risks becoming a police investigator’s to-do list. Although it’s no longer listed, the aforementioned CannaBus 780 could previously be found on Weedmaps, as well as a few other listings sites.

“From a policing perspective, it’s a bit like playing Whack-a-mole because the internet is what it is,” he says. “They’re taking steps that they feel are necessary in order to promote the licit market by arresting everyone in the illicit market, and obviously that’s not a tactic that was successful over the hundred years of prohibition that we had in this country.”

So long as the demand exists, he says there’s an incentive for illicit sites to simply launch on another domain. And for now, some medical consumers are still loyal to the mail-order sites they’ve always used, and the discrepancies between product quality and pricing in particular continue to draw consumers of all kinds to the illicit market.

Provincial retailers have tried to narrow the price gaps between the two markets. The Ontario Cannabis Store, for example, has lowered prices on a number of products and started offering discount strains available in bulk sizes, like ounces of flower. But thus far, not all customers see a price incentive.

“The prices for bulk quantities (in the illicit market) can’t be beat,” says one Ontario-based online buyer. “I’m consistently finding an ounce for $100 online, and with some stuff on the OCS website, it’s going to be $100 for a quarter — and the quality won’t be much better.”

What happens to consumers?

For customers, buying weed online from an illicit source isn’t risk-free either.

“Technically police could use that data to try to charge people, but in my view that would be what’s called de minimis,” Lloyd says. “It would be a lot of litigation if they wanted to prosecute every person who used cannabis that wasn’t coming from the provincially licensed stores. So I find that unlikely.”

Some customers say they have paid for an order that didn’t arrive, or they weren’t satisfied with their purchase and didn’t have recourse. And while many illicit sites have privacy policies in place, it could be more challenging to hold an illicit cannabis retailer accountable for a privacy breach in the same way that a government-regulated retailer would.

But several individuals contacted for this story said they weren’t any more confident in the government’s ability to keep customer data secure than they were in illicit retailers’ capabilities. And with strict drug laws in place internationally, and even the potential to be banned from the U.S. under federal laws, some shoppers said they would never buy regulated weed for that reason.

When asked if illicit cannabis sellers deserve similar scrutiny when it comes to potentially selling or sharing customer data with third parties, or inadvertently contributing to a larger organized crime ring that could be involved in activities beyond weed, Lloyd had a passionate response.

“Time and time again, we see legal cannabis companies having massive issues with privacy, and I don’t see it in the the unregulated market,” he says. In November of 2018, for example, 4,500 Ontarians were affected by an Ontario Cannabis Store data theft. “I’ve heard too many stories from patients and cannabis enthusiasts … that they’re nervous purchasing from legal retailers because data keeps getting put into the public domain.”

Nova Scotia’s Andrew agrees. He says that even though he would never support the legal industry due to what he sees as hypocrisy, he can’t possibly vet the illicit cannabis sellers he buys from to see if they match up with his own code of ethics. If he started vetting everyone he bought anything from in that way, he says, it would likely make it difficult for him to buy much of anything at all.

“I’m trying to do what I can to un-fuck the world,” he says. “But I’m not sure I’m going to un-fuck it by buying from the Nova Scotia Liquor Corporation.”